Feature: Lin-Manuel Miranda on Times Magazine for His Dark Materials

On Saturday October, 19 Lin-Manuel Miranda graced the cover of Times Magazine with a long interview where he touches many topics, from the upcoming TV show His Dark Materials to how he takes care of his mental health.

In our Gallery you can see a new promo picture from His Dark Materials and a new portrat, while below you can read some highlights from the article. 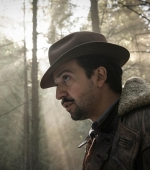 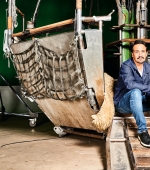 He claims to be totally exhausted, in the middle of a busy day promoting His Dark Materials (set in a parallel universe in which our young heroine, Lyra, leaves Oxford in search of a lost friend; Miranda plays the character of Lee Scoresby, an aeronaut who flies a balloon), adding that he has barely slept. (“It was musical beds. I went to bed with my wife. At 1am the baby started crying and she went to his room and then never came back, and around 2am my other son crawled in and slept perpendicular to me, his feet in my face.”) But he is nevertheless one of the bounciest people I have ever met.

He cheerfully insists he loves the Pullman trilogy of books, which have sold more than 22 million copies globally (“I fell in love with them in my mid-twenties. When I started dating my wife, they were one of the series we read together, and I was really thrilled to be asked to be a part of it”) and says he “adores” working with puppeteers (everyone in Lyra’s world is permanently accompanied by an animal daemon that is an external manifestation of their inner self, and the actors performed opposite these daemons in puppet form). Working on Sesame Street – a “thrill” – was good preparation for the task (“The best part of that gig is the first time you do it, you get a PDF file which is the vocal ranges of the Muppets, and that’s a cool PDF to have”), he likes being in Cardiff, where it is being filmed (“Listen, I have a four-year-old little boy who is super-into knights and dragons, so the fact that I’m in a place where there’s a castle every exit on the motorway is pretty great”) and is treasuring the opportunity to travel with his family (“We knew there was a cap on our time to travel because my son starts kindergarten in the fall … Then I’ll be home”). And yes, Cardiff does count as thrilling travel. “The only people who are snobby about Cardiff are Londoners! You know what I love? I love hanging around the mall! I grew up in the city, so malls are still kind of a novelty to me.”

“We got our first car last summer: it’s a wagon that fits two child car seats.” And I read he still lives in the Washington Heights/Inwood neighbourhood in Upper Manhattan that he grew up in? “Yeah, I live 20 blocks from where I grew up, and all four grandparents are walking distance from my kids – that’s the best thing.” Before we get carried away about his humble ways, I should say there are two PRs listening in to our conversation from a table behind us, and when I refer to a claim that he still flies commercial, it turns out the experience of starring in the recent Mary Poppins Returns has left him not unaccustomed to the occasional private jet. “I fly commercial most of the time.” A coy glance. “If it’s Disney and they want you to be back at a certain time, and you are doing press for them, you serve the pleasure of the Walt Disney Company.”

I refuse to believe he hasn’t splashed out more. “When does this come out? It is my wife’s birthday in two weeks, and my wife’s favourite book is Moby-Dick. I went to a rare books place this morning and bought a first-edition complete Melville, and I will not tell her how much I spent on it. It was expensive: it was not as much as a car, but it was expensive. It’s funny – I’ve met other composers who have hits, and they all have the eccentricity that wealth has allowed them to have. You know, Andrew Lloyd Webber famously has art falling off his walls, and he has a couple of theatres – I’m never going to buy a theatre! You go to Stephen Sondheim’s house: he’s got puzzles; he’s a puzzle guy. Alan Menken, composer of The Little Mermaid, has a tortorium [turtle house]. I’m in the market for an eccentricity.”

It turns out that he went into therapy to help deal with the change. “I’ve been in therapy intensively twice in my life; I’m probably due for a third. The first time was after sophomore year [the second year] in college, breaking up with my first serious girlfriend. We’d been together for four and a half years. It was like a summer of therapy and it was great. The other time I did it, the other summer of therapy, was in the transition between off-Broadway and Broadway for In the Heights, and it was sort of beginning to deal with success, and my relationship with my girlfriend, now wife, was getting serious, so I just had a ton of shit that I needed to sort out on the table.”

He says he doesn’t get recognised that often, and characteristically doesn’t mind when he is (“People are 99 per cent of the time cool”), but I realise at this point that the two business executives on the table next to us have given up analysing spreadsheets on their laptops in favour of eavesdropping on this increasingly intimate conversation. He said he might be due another round of therapy? “Sure. My life’s changed a lot, I’m juggling a lot and I’m trying to be the best parent I can and the best husband I can. That balance is always hard. I could probably use a couple of sessions to work all that shit out. I could probably do with another summer.”

Feature: Behind the scene of His Dark Materials with BBC

1 Comment to "Feature: Lin-Manuel Miranda on Times Magazine for His Dark Materials"