Feature: Behind the scene of His Dark Materials with BBC

The TV series His Dark Materials premieres on BBC One on Sunday October, 3 and the BBC offered a few features from behind the scenes with interviews to the talents involved, we quoted al the parts about Lin-Manuel Miranda below while the whole articles can be found here and here.

Plus, the feature had a picture of Miranda on set, check it in our gallery. [EDIT: Added a video from the set with an interview and new scenes.] 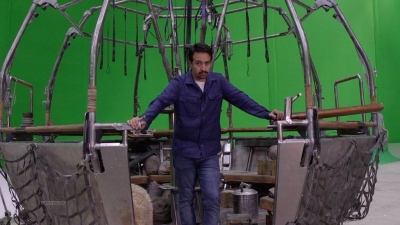 Six months later, on a warm summer’s day, another main cast member, the acclaimed Lin-Manuel Miranda, strides across a studio floor in Cardiff.

The production has predominantly been filmed inside a former factory, which is now home to the 250,000 sq ft, state-of-the-art Wolf Studios – and that’s in no small part to the unpredictable weather.

Miranda, best known as the Tony award-winning creator and star of the musical Hamilton, leaps into a metal shell resting against a vast green screen.

“Welcome to my hot air balloon,” he grins, explaining he plays the part of aeronaut Lee Scoresby, who he describes as a “Hans Solo-type figure” who helps Lyra on her journey.

“When you see this on the screen, it’ll be flying through the clouds,” he laughs, all thanks to computer generated technology.

The American actor describes himself as a huge fan of the Pullman books, which he first discovered in 2005.

His Dark Materials is made up of three novels; Northern Lights, The Subtle Knife and The Amber Spyglass. They’ve been translated into 40 languages and sold close to 18 million copies worldwide.

Miranda says he’s thrilled to be part of the landmark series and didn’t need to think twice when he was approached to play the part.

He describes every day’s filming as “a new adventure”.

“Today I’m swinging in the hot air balloon, tomorrow I’m having a bar fight, tussling with stuntmen all day.”

And while he says it’s not the same buzz as performing before an audience, he says he’s equally enjoying this experience.

“The energy comes from knowing we are not coming back to this, from being ever present because you know this is the day to get this done and that’s the substitute to an audience for me,” he says.

He’s also enthusiastic about his time spent in Wales, having made Cardiff his home for months at a time – and delighting locals with regular appearances at a karaoke club in the Welsh capital.

Lee Scoresby’s daemon is an arctic hare named Hester and Manuel admits he’s become quite attached to the creature made from rope and foam, welcoming him on set like an old friend.

Overall, Manuel says he became engrossed in Pullman’s work by its complexity and themes, adding “it takes on life and death, love and growing up and losing people”.

Relocating to south Wales to film His Dark Materials was a “joy”, Hamilton creator and star Lin-Manuel Miranda has said.

The TV adaptation of Sir Philip Pullman’s trilogy is being screened in London before being broadcast on BBC One in November.

The actor plays Lee Scoresby in the series, which was made by production company Bad Wolf in Cardiff.

Miranda shared his love of Wales on social media during filming.

Speaking to the BBC, he said: “I think part of the joy of saying yes to this was in getting to live in a new part of the world.

“My wife is a lawyer and she does her homework, so every weekend is a different expedition. So, we are going to go to Hay-on-Wye and eat ice cream, and go to all the used booksellers and find cool stuff to read.

“Or we are going to go to Caerphilly Castle and take the kids. I was very lucky that my oldest son was in a knight phase and we had no shortage of castles to take him to.”

To the joy of many locals, Miranda, who has won Tony, Emmy and Grammy awards for his work, was also spotted at events including a musicals karaoke evening at a bar in Cardiff.

Miranda said: “Let me ask you something, wouldn’t it be weirder if there was a musical theatre karaoke going on in Wales and I wasn’t there?

“Yes, someone on Twitter invited me and they were like, ‘Hey, we do musical theatre karaoke, first Thursday of the month,’ and I was like, ‘I’ll see you there!’ And it was great. I brought a bunch of the crew, and it was a fun night out for a lot of the company.

“The next month was a costume night so I came in a phantom mask that I bought in Venice on my weekend off. It was brilliant.”

Feature: Lin-Manuel Miranda on Times Magazine for His Dark Materials