After closing its doors at its longtime 40th Street home in January, the Drama Book Shop is preparing for its moment back: it’s slated to reopen in March 2020 in a new location, 266 West 39th Street. Lin-Manuel Miranda, Thomas Kail, Jeffrey Seller, and James L. Nederlander perchased the shop when it was struggling and teamed up team for the relaunch with Hamilton set designer David Korins, who modeled the new space after European cafes and reading rooms. The venue will feature a coffee shop, a basement room for readings and classes, and as its centerpiece, a large spiral structure inspired by dramatic literature.

Check a rendering of the Drama Book Shop interior, designed by David Korins, in HQ in our Gallery. 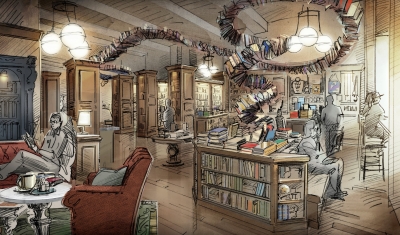 “The Drama Book Shop is the heart and soul of the New York theater community. It’s been an oasis in midtown for a century of storytellers and theater fans alike — a safe space to gather, to learn, and to find great books and music. I found my collaborators there. I wrote drafts of In the Heights there. Freestyle Love Supreme was born there. I made sure the first book-signing of Hamilton: The Revolution was held there. The Drama Book Shop is home. To the next generation of dramatists, actors, directors, composers, choreographers, designers, and theater enthusiasts: the stage is set…Come in. Discover. Enjoy.”

Check in Gallery the picture below. 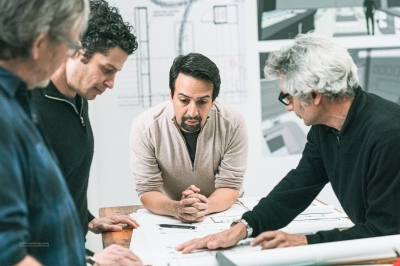 Under the cut, read The New York Times’ article about the news.

THE NEW YORK TIMS: The Drama Book Shop has a new home.

Lin-Manuel Miranda and three of his collaborators on “Hamilton,” seeking to breathe new life into the cherished but challenged Midtown retailer, said they will reopen it in the spring on West 39th Street, in a garment district storefront just a block south from its previous location.

“It was both a destination for tourists and it was also our hub, and so we wanted to keep it close to the theater district,” Miranda said. “And, too, we’re in the business of creating community, and that’s another thing the Drama Book Shop does, and that’s incalculable — I can’t tell you how many creative teams on theater companies say ‘Let’s go meet at the book shop and talk there’.”

The book shop is a century-old mainstay of the city’s theater community, selling scripts and books about the stage. But recently it has struggled to stay afloat in a pricey real estate market.

Earlier this year, after the book shop’s owners said they were being forced out of their most recent home on West 40th Street, the “Hamilton” team purchased the operation in an effort to rescue it. The new owners are Miranda, who wrote and starred in the blockbuster musical; Thomas Kail, who directed it; Jeffrey Seller, who was the lead producer; and James L. Nederlander, whose company operates the Broadway theater where the musical is running.

They closed the store at its previous location in January, moved its contents into storage, and, with the assistance of city officials eager to preserve an arts-related business in Midtown, looked for a new location.

Miranda and Kail have a particular affinity for the store because they worked on “In the Heights,” their first musical together, in its basement. “If I was ever stuck, I was surrounded by the greatest plays and musicals of all time,” Miranda said.

Another “Hamilton” connection: The store’s designer is David Korins, who created the musical’s set. The store’s new centerpiece, Korins said, will be a large spiral worm-shaped sculpture of dramatic literature, bursting out of the back wall and corkscrewing into the space.

The store, expected to open in March, will now be located at 266 West 39th Street. With a look inspired by European cafes and a reading room atmosphere, it will sell coffee, merchandise and writing materials, along with play scripts, librettos and books about the arts. A basement level could be used for classes, readings or other gatherings.

The new owners saved the old-fashioned sign and an upright piano from the previous location.

“Early on, Jeffrey sent me an article about European cafes of 100 years ago, and how they were beautiful spaces where people would sip coffee and exchange ideas,” Korins said. “We wanted to create a space where we were looking back into the past and into the future, so the space is carved up like a reading room cafe, with a tin ceiling, aged with patinas, and mix and match furniture.”

The manager of the 40th Street location has agreed to manage the new store; the operation will be overseen by a “Hamilton”-related company that already oversees another Midtown business — the musical’s merchandise shop.

Feature: Lin-Manuel Miranda on The Atlantic on What Art Can Do