Portraits of each of the gala’s honorees will be on view to the public in the National Portrait Gallery’s “Recent Acquisitions” exhibition through August 2020. 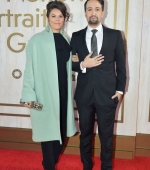 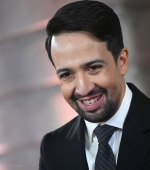 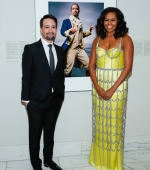 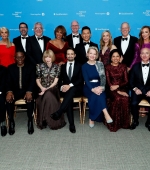 Watch an interview from the red capet below.

Lin Manuel Miranda: "One of the themes of the show is we don't get to choose how history remembers us, and I'm really feeling that theme tonight as I look at that picture." https://t.co/5WQR0CXcM4 pic.twitter.com/zh2qup5mpw

Under the cut you canread more from the red carpet.

THE HILL: in-Manuel Miranda says if he was ever to write a musical about Michelle Obama, he has just the right name.
“What was the name of the eat-your-vegetables initiative that she had?” the “Hamilton” creator asked a pack of reporters when questioned by ITK what he’d title a show focused on the former first lady.
After being reminded of the name of Obama’s anti-childhood obesity campaign, Miranda stated confidently, “It would be called, ‘Let’s Move!'”
The pair had some time to work on a potential Broadway collaboration — Obama was on hand Sunday to honor Miranda at the Smithsonian’s National Portrait Gallery’s gala in Washington.
The third biennial American Portrait Gala recognized the Broadway pro and five other honorees whose “accomplishments have made an impact on the nation’s shared history, development and culture.”
Others honored were Amazon founder Jeff Bezos, Vogue Editor-in-Chief Anna Wintour, the band Earth, Wind & Fire, astrophysicist Frances Arnold and business executive Indra Nooyi.
“CBS This Morning’s” Gayle King emceed the event, while Prabal Gurung — a favorite of Michelle Obama — served as the night’s honorary fashion designer.
Miranda, 39, called Obama his “dream presenter” for the black-tie gathering. The ex-executive mansion resident was an early champion of the composer. Miranda first publicly performed a song from “Hamilton” — which went on to be a 2015 Broadway smash hit — at the White House in 2009.
“That early advocacy, I can’t ever repay her for that,” Miranda, who’s part of Obama’s 2020 “When We All Vote” get-out-the-vote campaign, told journalists.