Lin-Manuel Miranda is on the cover of Departures, on the September issue dedicated to the 30th annyversary of the magazine.

Check the cover and the photoshoot in our Gallery and read the interview below. 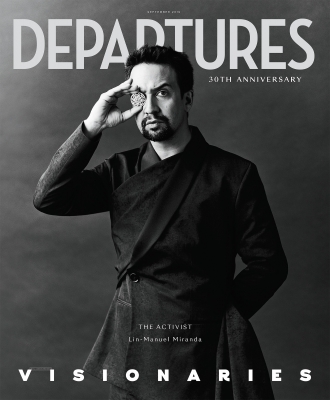 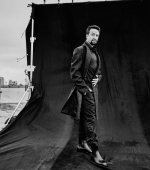 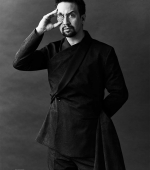 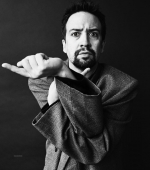 Lin-Manuel Miranda seems to be perpetually in motion. To wit, on a Monday afternoon in late May, I found him taking a short break from rehearsals for the film version of his first musical, In the Heights, which was shooting on location in Manhattan. He was also celebrating the finale of the FX miniseries he executive-produced, Fosse/Verdon, and prepping for a Broadway run this fall of Freestyle Love Supreme, the improv hip-hop collective he’s been a part of since 2004. And then there’s the movie musical he’s planning to direct, an adaptation of Jonathan Larson’s Tick, Tick…Boom!, and Vivo, the animated film he’s collaborating on with his In the Heights cowriter, Quiara Alegría Hudes.
But we were sitting down mostly to talk about his activism and philanthropy. Among the causes for which he has put his charisma and celebrity to work: Puerto Rico’s efforts to recover from Hurricane Maria, for which he has raised, with the help of American Express, more than $43 million for Hispanic Federation UNIDOS in addition to more than $14 million for Flamboyan Arts Fund.
March for Our Lives, the group against gun violence started by survivors of the Parkland massacre, and voter registration. Here’s how he explains his role as an entertainer and awareness-raiser.

QUESTION: To put it mildly, you have a lot on your plate. How do you keep your public roles as artist and activist in some kind of balance?

LIN-MANUEL MIRANDA: Balance is the thing you think about all the time. And that includes being a good dad, and taking my kid to school, and having time to sleep. I mean, I feel like we’re all balancing those things all the time. Like how do we get the time for the thing we really are passionate about doing, and balance that with things you have to do? How do you log the time with your family so that everyone’s good and in touch? And then there are the things that I feel like would fall under the category of “activism.” It comes from the same feeling as a creative impulse. It’s the thing that doesn’t leave you alone. That question of, Can I be of service here?

Q:What’s on your mind right now, aside from the ongoing issues you’re involved with?

LMM: The 2020 election is on my mind. I don’t have a candidate picked out yet. I think that will sort itself out, but voter registration is something that I’ve leaned into, even before anyone knew who I was. I think particularly when our issues are on the table as they are, for Latinx people, whether it’s immigration, whether it’s Puerto Rico, we have to come out and vote and be heard.

Q: Do you see yourself endorsing or full-throatedly campaigning for a candidate?

LMM: Yeah, probably. Someone who is criticizing me would say, “You’re an actor, you’re a writer—who cares?” Well, yeah, but I would have endorsed someone and I would have worked on their behalf before I had written Hamilton. So I’m just doing the stuff I would have done anyway. But when people say “stick to writing,” or “stick to acting,” or whatever it is they want you to stick to because it agrees with their thing—I would love to! I would love nothing more than to curl up in a ball and just write things, but our work exists in the world and our work exists in conversation with the world. So, we have to talk about the world as we see it.

Q: How much did your childhood affect your approach to activism, growing up with a father, Luis A. Miranda Jr., who worked in New York City government and is now a political consultant?

LMM: My dad, in many ways, functions as my Jiminy Cricket in terms of when I can be helpful in causes that are bigger than entertainment. I mean, we grew up in a political household. I remember registering people to vote when I was a kid. I would get sent to the Dyckman projects on 10th Avenue and go from one building to the next, from the top all the way down, with the green forms.

Q: What’s it like returning to In the Heights? Are you updating the script?

LMM: I mean, there are things that were implicit then that are explicit now, like the way this wave of Latinx immigrants has to fight for their personhood. In this world, we are more demonized than we have ever been. This notion of, “We came from somewhere else and we’re trying to make the best of our lives here. We are just like you”—this, somehow, is a radical statement in 2019. It shouldn’t be. It didn’t feel that radical in 2008 [when In the Heights opened on Broadway], but it actually is, because there are so many who would say, “You don’t belong here. This country’s full.” To see these characters joyously waving the flags of their home countries in New York City, it’s crazy that that’s a radical act. But it’s wonderful to put that on screen.