Coverage: Lin-Manuel Miranda talks about In The Heights and more at the Uptown Arts Stroll

[ Written on June 01 2019 by Francesca ]
On May 28, Lin-Manuel Miranda was at the opening of the Uptown Arts Stroll, the NoMAA’s annual month-long art festival in Upper Manhattan and, with his father Luis, spoke to Manhattan Times News about the event and the In The Heights movie, which will start shooting on location on June 3. About the movie, he said: “Possible surprises can definitely take place because it’s not a straight adaptation of the play on stage. We’ve updated it for 2019. It’s not 2008 In the Heights by any stretch. I’m excited because I think the changes were also made for the fans.”

Check our Gallery to see the photos in HQ. 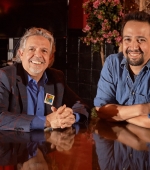 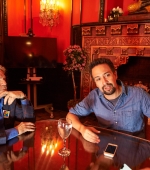 Under the cut you can read the whole interview.

What is it that makes the Uptown Arts Stroll unique?

Lin: Well, what I think makes it unique, and makes it special, is that as someone who has grown in the neighborhood, I find it so thrilling that so many of the artists who grew up here came back here and doubled down on here. People like Tony Peralta, people like me. I think most of the uptown artists have dispelled the notion of living up here and displaying somewhere else. That is the joy of the Uptown Stroll. Making your home also your artistic home. Uptown Stroll is a celebration of that and it has been for a while.

Luis: I will add that the arts are happening uptown and in the Heights all the time. But the Uptown Stroll is a concentrated month to tell the other neighborhoods that art is happening so that we can entice more people to spend in our restaurants, to spend in our bodegas, so that it is also an engine of economic growth here.

Both of you have been with Uptown Stroll since the inception. How has it changed?

Luis: It has become bigger! We had a one-day Art Stroll, which then became a week-long Art Stroll and then it turned into a month-long Art Stroll. And that comes from the fact that the number of events has grown. This year there are 300 events in the Art Stroll. When we started, this was an activity of The Manhattan Times. This is 17 years ago. We knew as this was growing that we needed to make a home for it. And when NoMAA (the Northern Manhattan Arts Alliance) was created, then NoMAA became its home.

You’re both active in community organizations. Where did that begin?

Luis: It comes from seeing it from my parents. It was a different kind of institution building. My father was the president of the Rotary Club and the Lions Club and the Cruz Roja de Vega Alta. So I learned that institutions were important organisms to help communities and people.

The Stroll this year will coincide with the filming of In the Heights uptown. What does that feel like?

Lin: I can just say that it’s an honor. I can’t believe that we are going to be filming In the Heights next week. To be honored here at Art Stroll hopefully for all of the energy we are going to bring to Washington Heights. We all posted over the weekend that we are looking for extras from Washington Heights to be in the movie. To be able to represent the neighbor with people from within in the neighborhood is such a dream come true for me.

Luis: In 2006, the Art Stroll was 6 years old. In the Heights was at the Richard Rodgers Theatre and we asked permission from the producers to give the Uptown Art Stroll guides for two weeks to the people waiting to go in to the theater. Because it was a way of letting them know that there was a real neighborhood that is called Washington Heights.

Lin, there are going to be a lot of Usnavis uptown. Any advice?

Lin: There are two really exciting takes coming up. There is Anthony Ramos who played my son Phillip in Hamilton and who is now playing Usnavi in the movie and then there is the student in George Washington High School. That is really exciting for me because that’s the hometown school and where I took my SATs. I’m really excited to see that production and see what those young students have been practicing.

What do you think has changed the most uptown since you wrote the musical?

Lin: I think everything that was written inside that musical is more relevant now then it’s ever been before. The issue of gentrification, of immigration, of what do we carry on as our legacy when our parents moved here from somewhere else. I think all those issues are issues that this neighborhood can relate to. And I think those issues have grown more prevalent. I remember the reviews of the musical would say “Well, are these issues very pressing?” You can’t look at a newspaper without seeing immigration and gentrification at the forefront. In a lot of ways I think the times have caught up to the show. I just think it’s more relevant now than it was in 2008.

What do you think would surprise people the most when the movie is released?

Lin: I don’t know.  Possible surprises can definitely take place because it’s not a straight adaptation of the play on stage. We’ve updated it for 2019. It’s not 2008 In the Heights by any stretch. I’m excited because I think the changes were also made for the fans.

Luis: To me, it is the authenticity of the movie. That fact that 90 percent of the movie is being filmed right on the streets of Washington Heights creates a hype and an energy that you cannot recreate in a set.

Where do you find inspiration uptown?
Lin: Everywhere. You know, most of Hamilton was written when I was walking up Inwood Hill Park, Isham Park and Fort Tryon Park. I find lyrics while walking my dog. Every lyric I’ve written has been written on these streets. When I wrote my verse for the Hamilton Mixtape, I was walking from my parents’ house to 181st and back. I literally find every lyric in the streets of this neighborhood. It is my greatest source of inspiration.

Photos: Lin-Manuel Miranda has a Surprise Cameo in Fosse/Verdon