Video: Fifth round of In The Heights movie junket press

We collected the inteviews, video and written, that Lin-Manuel Miranda gave so far to promote In The Heights movie. 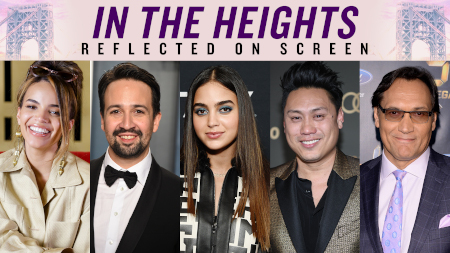 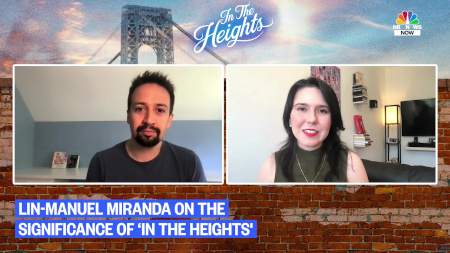 VOX: On the creators’ youthful dreams and love for musical theater

Theater saved my life. For me, it was like an invincibility cloak. So much of the trauma of high school is the life-or-death stakes inside your grade at any given time. But in theater, you make friends with kids in other grades. You’re doing something that none of you are getting paid for or getting credit for. You’re just trying to make something greater than the sum of your parts. And you suddenly have little pockets of allyship all over the school. I remember very distinctly when someone hated someone else, or someone wasn’t friends with me anymore, I’d be like, ‘Okay, I’m going to go visit my friends a grade younger and talk to them about it and maybe we’ll listen to Rent together.’ The world gets so much bigger.

And you’re trying to make something together. I remember our ‘illegal’ rehearsals, because school rehearsal wasn’t enough time. We would go to a church basement in Bay Ridge, Brooklyn. For me, that meant taking the A train to the D to the R, an hour and a half, to do rehearsals during spring break so that it could be the best thing it could be. We were giving our vacation to do that. The way you learn about sacrifice, and the way you learn that the world is bigger than the immediate drama of the present, is a lifesaver in high school.

How — and why — Miranda and Hudes wrote the original musical together

A lot of things went into that incredibly fertile creative time for me. I wrote [the first draft of In the Heights] on a winter break [from college]. I didn’t sleep. My long-term girlfriend went abroad. So suddenly, I had all this time, and all this angst, which are two of the ingredients you need the most when you’re 19 years old.

At that time I was living in the Latino program house [at Wesleyan University]. It was called La Casa de Albizu Campos, and it was on-campus housing. At Wesleyan, there’s a program house for every kind of cultural affinity. To get into La Casa, you needed to write an essay about how you plan to serve the Latino community at Wesleyan. My entrance was the arts. I was, I think, the only arts major in my house. I was there with engineering majors and math majors. But we were all first-generation or second-generation Latino kids. I didn’t have that experience in high school. And suddenly I had friends who were really just like me in that we were as fluent in some things — Marc Anthony, the TV we grew up with, Walter Mercado — as we were with mainstream American culture.

I think that was a big part of me being able to access more of myself in my writing. Everything I’d written prior to then kind of sounded like [Rent composer] Jonathan Larson, kind of musical theater-ish, rock-ish stuff. But I didn’t bring any of my culture to it or any of my heritage to it.

Living in that house, I realized, ‘Oh, there’s more out there like me. I just needed to write the truest version of what I know.’ This was in 1999 or 2000, at the time of the first Latin pop boom. Ricky Martin, Cup of Life. Marc Anthony singing in English for the first time. Enrique Iglesias, Bailamos. I’m watching all these incredibly talented Latin guys.

But they’re all incredibly hot Latin guys, and I was like, ‘That’s not me.’

I had directed West Side Story at my high school years before and realized that there was nothing in the musical theater canon that played to any of my strengths. So it was like, ‘Let me write what is missing.’ Then I had all of these other forces pushing on me that led to In the Heights. Can we talk about ourselves with love? Can we talk about our neighborhoods? And have a fully Latino cast?

Part of the genesis of the show was Latino representation in musical theater, which has a miserable track record. I think the only place with a worse track record is Hollywood — maybe not worse, but super different. It’s very hard to find Latino stories without crime or drugs at the center of them when it comes to mainstream Hollywood representation. That’s just not what we were interested in, but it’s so prevalent.

If you go read the reviews of the original Broadway show, they were like, ‘This is Sesame Street. There’s no drugs, there’s no crime.’ We had to have the audacity to write about ourselves with love, and to write about struggling businesses and struggling with college and the stuff that everyone else has permission to write about but us, apparently. If we do it, we’re airbrushing.

What we can get our arms around is: If you come from somewhere else, what do you share? What do you pass on to your kids? How do you feel at home, or not at home? And have every character wrestle with variations on that question.

Why they’re so glad they waited for a delayed release

This is a big-screen movie. I’m so glad we waited. Even though I was dragged kicking and screaming into waiting, I’m really glad we waited. Because I think a lot of people are gonna choose to see it together — and it’s a show about community.

My first time seeing In the Heights on a movie screen was a few days ago [in mid-May], at a drive-in in Puerto Rico with my cousins — who, by the way, are named Kevin, Camila, and Daniella, all characters in the show. And believe me, Camila is like, ‘What do you owe me for cutting Camila out of the movie? The next movie is gonna be named after me.’

To watch it in Puerto Rico on the big screen — as the kids say, it hits different. The applause after every number. I always say the best week of my artistic life was the week we brought the tour of In the Heights to Puerto Rico in 2011. I got to play with Usnavi and we got to pull those flags out. It healed something I didn’t know was busted to bring that show to Puerto Rico and have them be proud of it. And I got sort of an echo of that [when I saw the movie there].

In the article there are Hudes’ and Chu’s answers as well.

Video: Lin-Manuel Miranda talks about ‘In The Heights: Finding Home’ on The Daily Show with Trevor Noah