The Miranda Family teams up again with the Hispanic Federation to support the recovery of Puerto Rico: on October 24 was announced the launch of a five-year initiative to revitalize the island’s coffee sector. According to the press release, “the Hispanic Federation has made the first investment of $1 million. Nespresso has also committed $1 million, and The Rockefeller Foundation has given $500k. The Starbucks Foundation has given $470k, and Starbucks also donated 2 million high quality, climate-resilient coffee seeds. TechnoServe, an international non-profit with a long history of work in the coffee sector, will lead implementation of the program with a Puerto Rican-led team.”
Miranda visited a farm in Jayuya, check out the photos in Gallery and the video below. [EDIT: Added three more videos.] 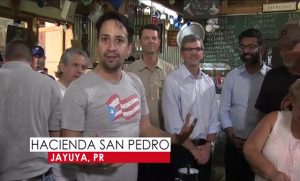 Under the cut you can read a Miami Herald article.

Miranda is the public face of a multi-million dollar, five-year effort that’s being spearheaded by The Hispanic Federation and includes heavy-hitters like Starbucks, Nespresso and the Rockefeller Foundation.

Under this initiative, the Hispanic Federation — which was founded by Miranda’s father, Luis — and Nespresso are each investing $1 million into the project. Starbucks will invest another $475,000 and donate 2 million climate-resistant seeds. The Rockefeller Foundation is investing $500,000, and TechnoServe, an international non-profit with a history of supporting the agricultural industry, will help implement the project.

The team has set the bar high. William Warshauer, the president of TechnoServe, said models suggest that coffee production could double its pre-hurricane levels within the next five years. And small farmers could see their profits increase 300 to 400 percent.

Puerto Rico’s coffee production was collapsing even before last year’s twin hurricanes. In 1995, the country produced 280,000 quintales — or 100 pound sacks — of coffee. Last year, before the hurricanes hit, production had fallen to just 65,924 sacks. But despite its decades-long struggle, coffee has always had a powerful role in the Puerto Rican psyche.

“We’ve always been proud of our coffee,” Miranda said, hiking up his pant-leg to show a small tattoo of a coffee cup.

Miranda – the winner of the Pulitzer Prize, a Tony, an Emmy and a Grammy for his work on the musicals “Hamilton” and “In the Heights” — has been a vocal advocate for the island and its post-hurricane recovery. His family is from Vega Alta, on the northern coast of the island, though he lives in New York.

Visiting Puerto Rico shortly after Maria tore through it, he said, he saw the denuded and brown landscape the storm left behind.

“You would never think you would see winter come to Puerto Rico but that’s what it looked like,” he said.

The Hispanic Federation, a New-York based nonprofit and advocacy group, jumped in to help with emergency relief efforts shortly after Maria, which is blamed for killing nearly 3,000 people, destroying huge swaths of the island, causing months of blackouts and worsening an already perilous economic situation.

Puerto Rico’s deeper structural problems were inescapable, said the organization’s president José Calderón. That a fertile and tropical island has to import 80 percent of its food illustrates the dysfunction.

That situation “is the bigger task for us,” he said. “How do we re-imagine Puerto Rico? How do we make this a place that can provide for its people and work for its people?” Helping revive the coffee industry is part of that larger vision, he said.

Vanessa Arroyo, a 36-year-old coffee farmer, said Maria set her farm, “La Franca,” back years. Of the 7,500 pounds she was expecting to harvest, she was left with about 1,000 ponds. Of the 20 acres of coffee she had planted, about half the plants survived.

“When I saw my farm after Maria I didn’t even recognize it,” she said.

Just as she was recovering from the storm, a fungus hit, killing more of her plants. Unsure what to do, she resorted to YouTube videos looking for answers.

She’s hoping the technical training and support provided by the initiative will help her turn the corner.

One of the key elements of the project is the donation by Starbucks of two million high-quality, climate-resilient seeds. The effort will include funding to train local nurseries to improve local varieties.

“We’ll have a combination of local seeds and the imported seed to try to spark some hope in the industry, quite frankly, that revitalization can happen quickly,” said Kelly Goodejohn, the director of social impact and public policy at Starbucks.

Zia Khhan, the vice president of innovation at the Rockefeller Foundation, said his nonprofit is committed to promoting a broad recovery for Puerto Rico. And one of the key elements of that has to be its farmers.

“We have done so much work over 100 years supporting agriculture and farmers and we know how critical it is — not just for food supply and value chains, but for small business people,” he said. “And coffee is a good small business.”

About 70 percent of Puerto Rican coffee growers are considered “small” — operating on plots of fewer than 10 acres.

Miranda — who stars in Mary Poppins Returns, a sequel to the classic children’s movie, and is preparing to reprise his lead role in “Hamilton” for its Puerto Rico debut in January, said he wanted the coffee initiative to bring hope to the island’s hard hit farmers.

There’s a frequently repeated saying on the island that Puerto Rican coffee used to be served to the Pope at the Vatican. “We’ll get there again,” Miranda said.

Miranda, who has been raising money for Puerto Rico’s recovery since the storm, has said proceeds from the “Hamilton” run will benefit the U.S. territory’s hurricane recovery.

“We are all pitching in to bring coffee back to Puerto Rico,” he said.