At the San Diego Comic Con, the cast and crew of His Dark Materials stopped by Entertainment Weekly’s studio for a chat and a series of portraits.

Check the photos in HQ in our Gallery and the video below. His Dark Materials took over Hall H at Comic-Con on Thursday afternoon, with stars James McAvoy (Lord Asriel), Lin-Manuel Miranda (Lee Scoresby), Ruth Wilson (Mrs. Coulter) and Dafne Keen (Lyra Belacqua) all present to show off the new trailer, after some of them took part to an autograph signing session.

Check all the pictures in HQ in our Gallery and the video of the whole panel and Q&A below. 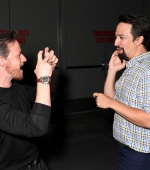 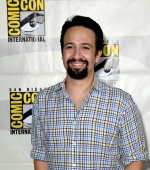 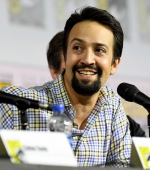 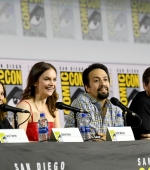 Check it out below.

Podcast: Lin-Manuel Miranda on The Good Place: The Podcast

During the show’s hiatus, host Marc Evan Jackson shoots the shirt with celebrity fans of The Good Place. In this episode, Lin-Manuel Miranda talks about his role opposite William Jackson Harper as a rapping apple in The Electric Company, playing Amy Santiago’s brother on Brooklyn Nine-Nine, his inspiration and process for writing Hamilton and much more.

Lin-Manuel Miranda is set to make his feature film directorial debut at Netflix with an adaptation of “Rent” creator Jonathan Larson’s “Tick, Tick… Boom!” Netflix acquired worldwide rights to the film, which is being produced by Imagine Entertainment’s Brian Grazer, Ron Howard and Julie Oh, as well as Miranda.

Variety: Following a heated bidding war, Netflix has walked away with the rights to “Tick, Tick… Boom,” a musical adaptation to be directed by “Hamilton” creator Lin-Manuel Miranda.

Sources say Andrew Garfield is the top choice to star, though no deal is done.

“Dear Evan Hansen” writer Stephen Levenson adapting the script based on the original stage show by the late “Rent” creator Jonathan Larson. Brian Grazer and Ron Howard and Julie Oh of Imagine Entertainment are producing along with Miranda. Julie Larson and Levenson are executive producing.

“Tick, Tick… Boom!” is set in 1990 and tells the story of Jon, an aspiring theater composer who is waiting tables in New York City while writing Superbia — which he hopes will be the next great American musical and finally give him his big break. Jon is also feeling pressure from his girlfriend Susan, who is tired of continuing to put her life on hold for Jon’s career aspirations. Meanwhile, his best friend and roommate Michael, has given up on his creative aspirations for a high paying advertising job on Madison Avenue and is about to move out. As Jon approaches his 30th birthday, he is overcome with anxiety — wondering if his dream is worth the cost.

Larson was the playwright behind “Rent,” the multiple award-winning musical, including the Tony for best musical in 1996. “Rent” was awarded a Pulitzer Prize for drama in 1996, an honor Miranda’s “Hamilton” received in 2016. Only nine musicals have won the Pulitzer for drama. Larson tragically died the night before the show’s first preview performance Off-Broadway. “Rent” ultimately spent 12 years on the Great White Way, making it the 11th longest running show in Broadway history.

Miranda frequently sites Larson as a source of inspiration. The film marks Miranda’s feature film directing debut, having worked mainly on Broadway for the past two decades as the playwright behind such massive hits like “Hamilton” and “In the Heights.” A movie adaptation of “In the Heights,” Miranda’s first Tony-winning musical, is currently in the works at Warner Bros.

Page 1 of 69« Previous 1 … 17 18 19 20 21 … 69 Next »
Official Lin (Manuel) Miranda
Site Twitter Facebook Tumblr YouTube
Current Projects
2020
Lee Scoresby
His Dark Materials
A young girl is destined to liberate her world from the grip of the Magisterium which represses people's ties to magic and their animal spirits known as daemons.
2021
Piragua Guy
In the Heights
A feature version of the Broadway musical, in which a bodega owner has mixed feelings about closing his store and retiring to the Dominican Republic after inheriting his grandmother's fortune.
Site Information