Video: Lin-Manuel Miranda “Wheel of Freestyle” on The Tonight Show

On June 18, Lin-Manuel Miranda appeared on The Tonight Show Starring Jimmy Fallon to reveal his plans for the new Broadway show created by his hip-hop collective Freestyle Love Supreme, after participating in a round of “Wheel of Freestyle” with Fallon. During the segment the singer faced off against The Roots’ Black Tought to test out verses with unusual words, which this time included “Daenerys Targaryen,” “seared salmon” and “Pikachu.”

Check the video below and the photo in our Gallery. 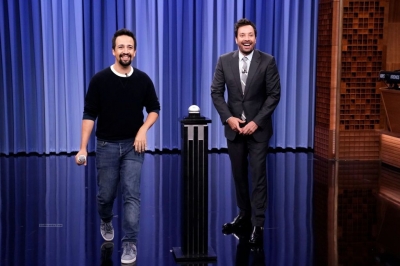