Lin-Manuel Miranda will be on the stage of the Lincoln Center Theater again, for a benefit concert, as King Arthur in a one-night-only performance of “Camelot” on March 4 at 6:30PM. 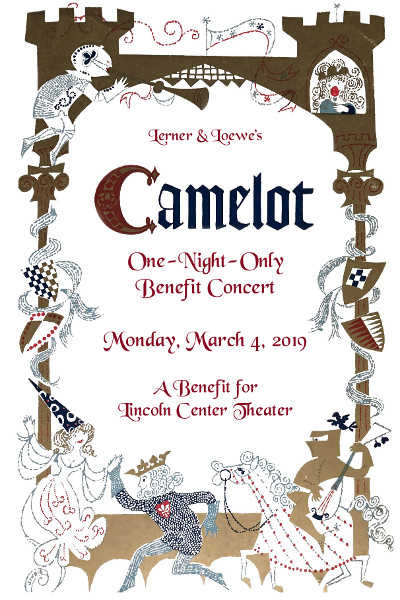 The New York Times: Lin-Manuel Miranda is going to be king for a day.

The acclaimed creator of “Hamilton” has agreed to lead a one-night concert performance of “Camelot” to benefit Lincoln Center Theater, the nonprofit’s leadership said Thursday.

Mr. Miranda will play the legendary King Arthur in the concert — a role originally played on Broadway by Richard Burton and on film by Richard Harris.

The best seats will cost a pretty penny: Benefit tickets, which include dinner with the cast, start at $2,500, and are available now. Starting Feb. 19 there will also be performance-only tickets available, for $95 and $195, as well as online lottery seats for $30.

The beneficiary, Lincoln Center Theater, is one of the city’s most prestigious nonprofits, presenting work in its Broadway house (the Vivian Beaumont) as well as Off Broadway.

The “Camelot” concert, which will be staged without costumes or sets, will take place on March 4, and will be directed by Bartlett Sher, whose productions at Lincoln Center Theater include the currently running “My Fair Lady” revival, as well as “South Pacific,” for which he won a Tony Award. The concert will feature a 30-piece orchestra.

The rest of the cast will include Solea Pfeiffer as Guenevere, Jordan Donica as Sir Lancelot, Dakin Matthews as Merlyn, Ruthie Ann Miles as Nimue, Ethan Slater as Mordred, Julie White as Morgan Le Fey, and Jenn Colella, Jason Danieley and Bonnie Milligan as three of the Knights of the Round Table.

“Camelot,” which features music by Frederick Loewe and book and lyrics by Alan Jay Lerner, first opened on Broadway in 1960; the film adaptation was in 1967. (Fun fact: The “Camelot” composers also wrote “My Fair Lady,” and this “Camelot” concert will take place on the stage where “My Fair Lady” is now running.)

Mr. Miranda won the Pulitzer Prize and two Tony Awards for writing “Hamilton,” and just finished leading the cast of a touring production of that show in San Juan, P.R. He is now co-producing, and expected occasionally to appear in, a Greenwich House Theater run by Freestyle Love Supreme, a hip-hop improv group he co-founded (and which, in 2014, had a brief run at Lincoln Center Theater).

He has described himself as a childhood fan of “Camelot,” which he knows from the cast album and has said is his mother’s favorite score. (It even gets a shout-out in “Hamilton” when Lafayette, who refers to himself as “the Lancelot of the revolutionary set,” says, “Who’s the best? C’est moi!” — a reference to a song sung by Lancelot in “Camelot.”)

“I’ve never seen a production of ‘Camelot’,” Mr. Miranda once told Time Out Chicago, “but I can tell you the version in my head, and it’s incredible.”

News: Lin-Manuel Miranda will be guest-star in Brooklyn Nine-Nine

Click here to cancel reply.
Official Lin (Manuel) Miranda
Site Twitter Facebook Tumblr YouTube
Current Projects
2020
Alexander Hamilton
Hamilton (Filmed Original Broadway Production)
The real life of one of America's foremost founding fathers and first Secretary of the Treasury, Alexander Hamilton. Filmed live on Broadway from the Richard Rodgers Theatre with the original Broadway cast. On Disney+ from July, 3 2020
2020
Himself
We Are Freestyle Love Supreme
A documentary that portray the journey of the improvisation hip-hop group Freestyle Love Supreme from 2005 to 2019. On Hulu from July, 17 2020
2020
Lee Scoresby
His Dark Materials
A young girl is destined to liberate her world from the grip of the Magisterium which represses people's ties to magic and their spirit companions known as dæmons. Streaming on BBC iPlayer and HBOMax.
2021
Piragua Guy
In the Heights
A feature version of the Broadway musical, in which a bodega owner has mixed feelings about closing his store and retiring to the Dominican Republic after inheriting his grandmother's fortune. In US theaters and on HBOMax on June 11, 2021.
Site Information