Lin-Manuel Miranda just announced that the recording of the original cast, filmed in 2016, will be released in theaters on October 15, 2021. Disney acquired the rights for the wide global theatrical release. 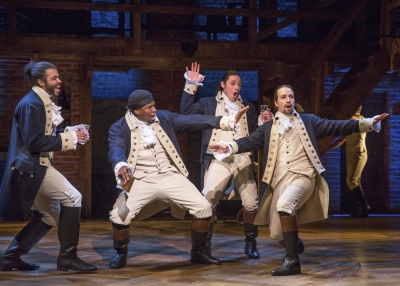 The Wrap: Lin-Manuel Miranda on Monday announced a filmed, movie version of his award-winning musical “Hamilton” featuring the original Broadway cast will be released by Disney in October 2021.

Miranda is producing with Jeffrey Seller and Thomas Kail. Kail also directed the film that’s described as a leap forward in the art of “live capture,” aiming to give a cinematic experience of the stage show.

“Lin-Manuel Miranda created an unforgettable theater experience and a true cultural phenomenon, and it was for good reason that Hamilton was hailed as an astonishing work of art. All who saw it with the original cast will never forget that singular experience,” Robert A. Iger, chairman and CEO, The Walt Disney Company, said in a statement. “And we’re thrilled to have the opportunity to share this same Broadway experience with millions of people around the world.”

“I fell in love with musical storytelling growing up with the legendary Howard Ashman-Alan Menken Disney collaborations – ‘The Little Mermaid,’ ‘Beauty and The Beast,’ ‘Aladdin,’” Miranda said in a statement. “I’m so proud of what Tommy Kail has been able to capture in this filmed version of ‘Hamilton’ – a live theatrical experience that feels just as immediate in your local movie theater. We’re excited to partner with Disney to bring the original Broadway company of ‘Hamilton’ to the largest audience possible.”

“We are thrilled for fans of the show, and new audiences across the world, to experience what it was like on stage – and in the audience – when we shot this at The Richard Rodgers Theatre on Broadway in June of 2016. We wanted to give everyone the same seat, which is what this film can provide,” Kail said in a statement.

A movie version of Lin-Manuel Miranda’s musical “In the Heights” will hit theaters this summer on June 26.

DEADLINE: When Lin-Manuel Miranda tweeted the news today that the movie adaptation of his groundbreaking Broadway show Hamilton was set for release by Disney in fall of 2021, he omitted one of the most breathtaking parts of the deal.

According to sources, Disney beat out other suitors and paid $75 million for worldwide rights to the show that won 11 Tony Awards in 2016, as well as the Pulitzer Prize for Drama. Disney won the deal with a commitment for a wide global theatrical release for the two hour and 40 minute movie, which was shot two weeks before the original cast left.

I can’t think of an acquisition of a finished film that has gone for more money than this one. It is, however, a seminal cultural zeitgeist event and as Miranda himself has said, the movie allows people to avoid having to pay $500 a seat, which they were before the original cast and he moved on. You could hardly call this profligate spending, given that it when Hamilton finishes its traditional theatrical run, it will then become a major title on its streaming service Disney +.

Director Tommy Kail directed both the stage version and the movie, which consisted of shooting three live performances, and also some set up shots without an audience. All of the footage was used to create multiple angles, to ensure the cinematic nature of the event, without a bad seat in the house.

Video: Lin-Manuel Miranda in the first clip of We Are Freestyle Love Supreme