News: Anthony Ramos to Star in ‘In the Heights’ Movie and digital casting search EXCLUSIVE FROM Variety: Anthony Ramos, the “Hamilton” alum who recently appeared alongside Lady Gaga in “A Star Is Born,” has found his next project.

Sources tell Variety that Ramos is in talks to re-team with “Hamilton” creator Lin-Manuel Miranda to star in the film adaptation of the 2005 Broadway musical “In the Heights.”

“In the Heights” follows the residents of largely Latino Upper Manhattan neighborhood Washington Heights – a bodega owner, a college student, a taxi driver, a beauty salon worker, and an old woman – aspire to better lives as gentrification begins to take hold, and a sweltering summer power blackout brings their personal life crises to a head. Quiara Alegría Hudes penning the script. “Crazy Rich Asians” filmmaker Jon M. Chu is on board to direct, while Miranda, Anthony Bregman, Mara Jacobs, and Scott Sanders will produce.

Warner Bros. won the bidding war this May for the movie version of “In the Heights,” which won the 2008 Tony Award for best musical. It had previously been set up at the Weinstein Company but was extricated last fall after the Harvey Weinstein sexual misconduct scandal broke open.

Miranda wrote the music and lyrics and portrayed the lead role of Usnavi in “In the Heights.” He then created and starred in the smash sensation “Hamilton,” which won 11 Tonys in 2015.

Ramos, who originated the roles John Laurens and Philip Hamilton in “Hamilton” on Broadway, is co-starring in police brutality drama “Monsters and Men.” He can be seen next in Legendary’s “Godzilla: King of Monsters.” He also has the Netflix series “She’s Gotta Have It,” which just finished shooting its second season.

But there’s more! The production is holding a worldwide digital casting search for young talent to help bring Lin-Manuel Miranda and Quiara Alegría Hudes’ Tony-winning musical to the big screen. Warner Bros. is accepting submissions via Cast It Talent through November 7. Those who wish to audition are instructed to choose from one of four packets of sides and perform a provided scene and song on camera. Applicants are encouraged to be familiar with speaking Spanish. While the sides contain lines for Nina, Daniela, Usnavi, and Sonny, these are not necessarily the roles that performers will be considered for. 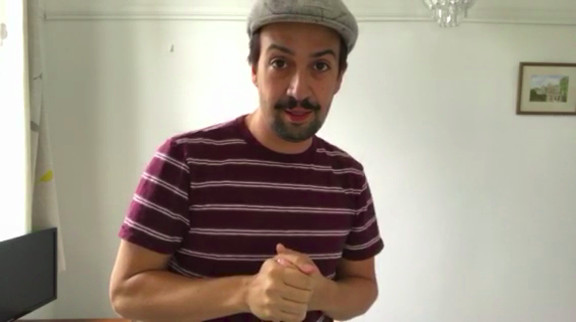