On November, 23 Lin-Manuel Miranda was on the Late Night with Seth Meyer to talk about tick, tick… BOOM! and Encanto.

Check the photos n HQ in our Gallery! 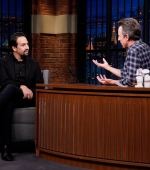 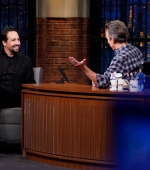 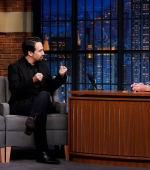 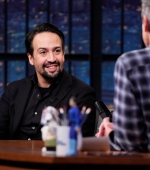 Watch all the videos below.

Video: Lin-Manuel Miranda at the Kelly Clarkson Show to talk about “tick, tick… BOOM!” and “Encanto”

On November, 23 Lin-Manuel Miranda was on the Kelly Clarkson Show to talk about tick, tick… BOOM! and Encanto.

Watch all the videos below.

Under the cut you can catch the segments with the other guests, for Lin-Manuel Miranda stayed and had something to add to the conversation.

END_OF_DOCUMENT_TOKEN_TO_BE_REPLACED

We collected the inteviews, video and written, that Lin-Manuel Miranda gave so far to promote tick, tick… BOOM! movie.

Let’s start with The A.V. Club.

Under the cut you can find more interviews, videos and articles: Collider, CNN Philippines, Up With The Curtain, Magic Radio, BEONDTV, CNN-News18, BroadwayWorld, All Of It With Alison Stewart and ShowbitzJunkies.

Lin-Manuel Miranda: “Film was always my first love. I went to college intending to study theatre and film, and then realized studying film is a lot more expensive than studying theatre. (laughing) And so every decision I’ve made post-Hamilton has been the film school I always wanted but couldn’t afford.

To get to work with Rob Marshall on Mary Poppins Returns was my auditing – watching Rob Marshall direct a musical. To get to dissect Bob Fosse and Gwen Verdon’s relationship as a producer with Fosse/Verdon and watch my good friend Thomas Kail make eight mini-movies about that genius director. And then my senior thesis was watching Jon M. Chu directing In the Heights. I learned so much…all the decisions he made and the way he ran a set.

I had really good role models. And so what made it feel like a natural fit was Jonathan Larson is the reason I started writing musicals in the first place. He’s the one who wrote Rent which just rocked my world when I was 17 years old; it just felt so personal and so homemade. It did feel like, you know, if this is going to be my first experience, it needs to be something I really understand at like a bone-deep level. I have been a struggling songwriter of musicals in my 20s. It was just something I felt like I really understood. And then I had just amazing collaborators and partners to fill in what I didn’t know and get us across the finish line.”

On discovering something new about Jonathan Larson as an artist within the process of making tick, tick…BOOM!:

Lin-Manuel Miranda: “What was wonderful was that I was lucky enough to play Jon in an off-Broadway production of this just before Hamilton happened, with my past and my future…with Karen Olivo by my side who was my co-star in In the Heights and Leslie Odom Jr who would become my co-star in Hamilton. I remember going to the reception afterwards and meeting all of the people who were very much a part of Jonathan’s life – his best friend, his girlfriend at the time he was writing tick, tick…BOOM!, his family, so many of his friends. And we really called on them as a resource, and also collaborators he worked with.

The documentary filmmaker R.J. Cutler directed one of the earliest drafts of Boho Days. I took him to lunch and just talked about what it was like collaborating with Jonathan Larson, which was easy in some ways and tough in others. I talked to Roger Bart who we honored with Josh Henry sort of playing a version of him because Roger was a fellow waiter and artist and sang backup for all of Jonathan’s concerts. Roger gave us so many insights on Jonathan as a person versus Jonathan in a rehearsal room, and what that specific energy was like.

Ira Weitzman became a character in this just because our conversations with Ira who was one of his first patrons in the ‘80s. The thing I discovered was sort of a more complete version of who Jonathan was. He was totally impatient with the world but this is not someone who is doubting his gifts. He was doubting the world’s ability to recognize it which is, I think, far more interesting.

I know firsthand the stress of having a whole ass musical in your head and how many obstacles there are to the world hearing that. Getting actors and getting collaborators who believe in you and producers who are willing to put their money where their words are. There are so many steps, such a gulf between what you’ve got inside you and getting it out into the world, and the impatience and stress of that. We got all angles on that from the people who loved him the most.”

On the dichotomy of playing Jonathan on stage performing and also playing him as a character in a film:

Lin-Manuel Miranda: “And just the stamina it takes for Andrew to play Jonathan turned up to 11 all the time was something I just got to marvel at every day. I first saw him in Angels in America which takes extraordinary stamina; it’s a six-hour play in two parts. And to be that open and that vulnerable for that long is an endurance test. It’s an emotional endurance test. I was just in awe of his abilities to do that every day.”

On bringing the passion and emotion of live theatre to the big screen:

Lin-Manuel Miranda: “I’m so glad we were just talking about New York Theatre Workshop because we were filming that in October/November of 2020 when theatre was dark all over the world. And for one week the only show in town was Jonathan Larson playing the New York Theatre Workshop. We really felt how sacred and special and what a privilege it was to be singing his songs at a time when all of our fellow theatre artists were at home wondering if their industry was going to come back. It felt like a real sacred responsibility, and so that time in particular felt very poignant and special.

There’s another time when we were filming a sequence in Shubert Alley and our holding areas were all the darkened Broadway theatres. I remember walking into the Phantom of the Opera’s home and just seeing that chandelier sitting there unlit with the ghost light on the stage wondering if we’d ever come back. That’s why I was so thrilled to go to the Phantom reopening about three weeks ago because I had a moment in that space being like, ‘Are we ever going to gather in the dark and tell stories again?’

Little by little it’s coming back.” 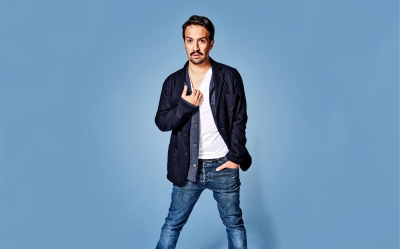 END_OF_DOCUMENT_TOKEN_TO_BE_REPLACED

On November, 21 Lin-Manuel Miranda was on Sunday TODAY to talk about tick, tick… BOOM! and much more.

Listen to the full conversation below.

Page 1 of 40« Previous 1 2 3 4 … 40 Next »
Official Lin (Manuel) Miranda
Site Twitter Facebook Tumblr YouTube
Current Projects
2020
Alexander Hamilton
Hamilton (Filmed Original Broadway Production)
The real life of one of America's foremost founding fathers and first Secretary of the Treasury, Alexander Hamilton. Filmed live on Broadway from the Richard Rodgers Theatre with the original Broadway cast. On Disney+ from July 3, 2020
2021
Piragua Guy
In the Heights
A feature version of the Broadway musical, in which a bodega owner has mixed feelings about closing his store and retiring to the Dominican Republic after inheriting his grandmother's fortune. In US theaters and on HBOMax on June 10, 2021.
2021
Director
tick, tick... BOOM!
On the brink of turning 30, a promising theater composer (Andrew Garfield) navigates love, friendship and the pressure to create something great before time runs out. In selected theaters from on November 12 and on Netflix from November 19, 2021
2021
Songwriter
Encanto
The film is centered on a young girl and her family in Colombia, who all have magical powers, sadly, the young girl has no powers. In theaters on November 24 and on Disney Plus from December 25, 2021.
Site Information