The second chapter of the web series Discover Puerto Rico with Lin-Manuel Miranda has a guest: ex Miss Universe, Denise Quiñones.
The two artists describe the Island’s uniqueness and the inimitability that invites one to come back for more.
Check the episode, “Reverse Commute”, below and the screen captures in our Gallery. After last October, when the news that the Drama Book Shop was struggling and couldn’t afford to pay the rent after a new hike, Lin-Manuel Miranda sprung to action, first spreading the news on social media, signing books in the shop, and then buying it with some friends of his Hamilton team: director Thomas Kail, lead producer Jeffrey Seller, and landlord James L. Nederlander. 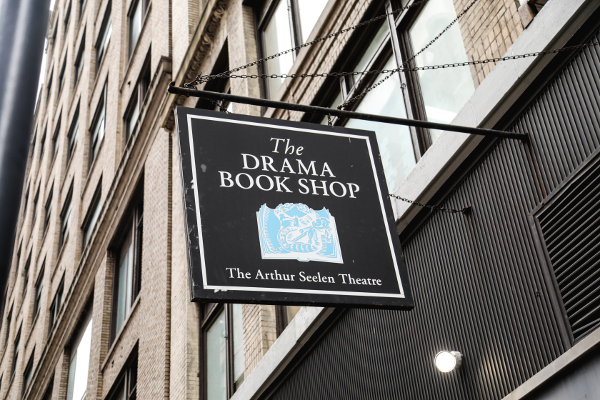 THE NEW YORK TIMES: Lin-Manuel Miranda is already a composer, a lyricist, an actor and an author. Now he’s going to be a bookseller.

Mr. Miranda and three of his “Hamilton” collaborators have purchased the Drama Book Shop, a century-old theater district purveyor of scripts, sheet music and other stage-related reading material.

The surprise move is an effort to sustain the store, which is a mainstay of New York’s theater scene — in 2011 it was recognized with a Tony honor for excellence — but has struggled to survive the brutal Times Square real estate market and recently announced that it was being forced to move from its current location.

The rescue plan is a joint venture between the “Hamilton” team and the city, which has pledged to find the store an affordable space in Midtown.

“The store is a gem and a cultural institution in New York, and we want to make sure it’s saved,” said Julie Menin, the mayor’s media and entertainment commissioner. As precedent for the arrangement with the bookstore, she cited the city’s work with the Berklee College of Music to save a Manhattan recording studio.

The Drama Book Shop, which currently sells about 155,000 items a year, will close at its current location, on West 40th Street, on Jan. 20, and will reopen at a new location, not yet being named, in the fall.

The new owners of the store are Mr. Miranda; Thomas Kail, the director of “Hamilton”; Jeffrey Seller, the lead producer; and James L. Nederlander, the president of the Nederlander Organization, which operates the theater in which the show’s Broadway production is running. They purchased the store from Rozanne Seelen, whose husband, Arthur Seelen, had bought it in 1958. (He died in 2000.) Ms. Seelen said she sold it for the cost of the remaining inventory, some rent support in the store’s final weeks, and a pledge to retain her as a consultant.

“It’s the chronic problem — the rents were just too high, and I’m 84 years old — I just didn’t have the drive to find a new space and make another move,” she said. “Lin-Manuel and Tommy are my white knights.”

The new owners all frequented the bookstore at various points when they were seeking to build careers in the theater.

“When I was in high school I would go to the old location and sit on the floor and read plays — I didn’t have the money to buy them,” Mr. Miranda said in a telephone interview from Puerto Rico, where he is preparing to star in a three-week run of “Hamilton” in San Juan that opens on Friday. “After college Tommy Kail and I met in the Drama Book Shop basement, and I wrote a good deal of ‘In the Heights’ there.”

In 2016, after a burst pipe caused damage to the shop, Mr. Miranda came to its aid by urging his fans to patronize it. The store needed a lot more help this time.

“They’re like family to us,” he said, “and when we heard that the rent increase was finally too precipitous to withstand, we began hatching a plan.”

The store is particularly important to Mr. Kail, whose post-college theater venture, Back House Productions, was a resident company at the store. “I was in many senses professionally born in that bookshop’s basement — I spent the first five years of my career there,” he said in a telephone interview from London, where he was checking in on the “Hamilton” production there.

Mr. Kail and Mr. Miranda both said that they were also inspired by “It’s a Wonderful Life,” in which townspeople rally to save an endangered family banking business. “There was no hesitation,” Mr. Kail said. “The Building and Loan was struggling, and we could do something.”

Mr. Seller’s office, which is already running a “Hamilton” merchandise store in Midtown, will oversee the day-to-day management. He said the book shop would have a revamped website and expanded programming; the goal, he said, would be to break even, which in recent years the store has done occasionally but not consistently.

Photos: Lin-Manuel Miranda and the Mary Poppins Returns cast on The Wrap

Lin-Manuel Miranda, Emily Blunt, Emily Mortimer, Ben Whishaw and Rob Marshall are on the 2019 Oscar Nominations Preview issue of The Wrap.
Check the scans and the photoshoot in Gallery. On Sunday January 06, during the Golden Globes awards E!’s Live From the Red Carpet pre-show, Lin-Manuel Miranda launched #Ham4PR50, a new Prizeo campaign to support the Hispanic Federation and the Flamboyan Arts Fund, that Lin-Manuel and his family created in partnership with the Flamboyan Foundation to support institutions and arts groups as well as independent artists, musicians, galleries, etc.
Let him explain the new contest in the video and the note below.

A NOTE FROM LIN-MANUEL MIRANDA

I’m finally in Puerto Rico and getting ready for the show to open on January 11th. Your outpouring of support has been amazing, and I couldn’t help but think — How can we get more of you to come here while continuing to support the Flamboyan Arts Fund and the Hispanic Federation?

So, here’s the deal:

• I am doing a 10-day Prizeo campaign. Think of it as #Ham4PR’s big send-off.
• During the campaign, we will select 50 winners to come to the closing night of Hamilton in Puerto Rico. It’s going to be emotional!
• Yep, you’re reading that correctly: 50 WINNERS!
Each winner will win round-trip flights for themselves and a +1, hotel accommodation for 2 nights, 2 tickets to closing night, and 2 passes to our closing night party on January 27th in San Juan.

So, there it is. The biggest Prizeo ever, with the most winners… ever.

Page 1 of 94« Previous 1 … 32 33 34 35 36 … 94 Next »
Official Lin (Manuel) Miranda
Site Twitter Facebook Tumblr YouTube
Current Projects
2020
Alexander Hamilton
Hamilton (Filmed Original Broadway Production)
The real life of one of America's foremost founding fathers and first Secretary of the Treasury, Alexander Hamilton. Filmed live on Broadway from the Richard Rodgers Theatre with the original Broadway cast. On Disney+ from July, 3 2020
2020
Lee Scoresby
His Dark Materials
A young girl is destined to liberate her world from the grip of the Magisterium which represses people's ties to magic and their animal spirits known as daemons.
2021
Piragua Guy
In the Heights
A feature version of the Broadway musical, in which a bodega owner has mixed feelings about closing his store and retiring to the Dominican Republic after inheriting his grandmother's fortune.
Site Information