Feature: His Dark Materials on The Sunday Times

The Sunday Times has a long feature about His Dark Materials, the show produced by the BBC and the HBO, full of pictures from behind the scenes and interviews with Dafne Keen, Ruth Wilson and Lin-Manuel Miranda.

In our Gallery you can see Lin-Manuel on set as Lee Scoresby with the puppet that serves as his dæmon Hester, and below you can read his part of the article. 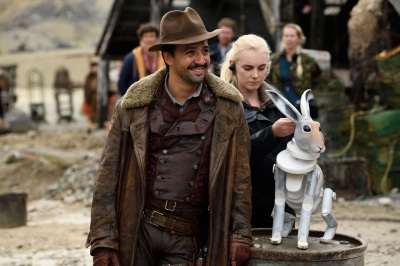 A two-hour drive north of Cardiff, I am greeted by the anomalous sight of Lin-Manuel Miranda, the American creator and star of Hamilton: An American Musical, standing next to a hot-air balloon in the middle of a Welsh forest dressed in full country-and-western leathers. Miranda is playing Lee Scoresby, the swashbuckling aeronaut who helps Lyra on her journey. He has spent half of last year and half of this year living in Cardiff with his young family. How is he enjoying God’s own country? “I had no preconceptions of Wales,” he says. “Wales is not in the global imagination in the way that London is, or even Scotland or Ireland, so my family came over to beautiful countryside and we lived in a nice part of town near the mall. It was wonderful and then on our weekends we would go and explore a different part. They have castles everywhere to play with.” Before we meet, several cast and crew have whispered about the extent of his immersion in local culture. He has found a musical-theatre singalong in a local pub and has become a regular attendee. When I ask if that could possibly be true, he says, “Why would I miss that?”

To say he’s loving the part is an understatement. “On my first day, I got to do one of those classic bar scenes in a western,” he says, “where you come in and you say the wrong name and the music stops and everyone turns and looks up from their deck of cards.” He took the part because he and his wife had read the books when they’d just started dating. “They’re kind of in our courtship,” he says. He was also won over by the fact that Jack Thorne was writing the script. “Dealing with this beloved literary series is like threading the impossible needle. But I loved Jack’s adaptation of Harry Potter. He’d already done it once, so I trusted his ability to do it with Pullman’s work.”

He nods when I suggest the deeper theme of the trilogy — of Lyra’s pursuit of truth — is particularly apposite in an era of fake news. “You’re talking to the token American in the cast and it couldn’t be more relevant,” he says. “In terms of our current president dumping facts from the EPA website or, what I wish was less relevant, the notion of separating children. That is a major plotline in our series and that is a crisis happening at our border [with Mexico] right now. The big theme of Philip Pullman’s world is the notion of what happens when giant forces, whether they be governmental or religious, try to oppress us. That is universal. The teams will have different names, but that is the universal thing he hits at.”

From there, he digresses into his love of Welsh cakes and British sweets — “I’ve been munching on Dip Dabs and flying saucers” — before he is called back to his hot-air balloon by the director.