On November, 8 Lin-Manuel Miranda spoke on stage at the “Stories to Tell: Lin-Manuel Miranda and Elizabeth Rutledge in Conversation” panel at the Fast Company Innovation Festival in New York. During the panel, he talked about Hamilton, his ties with American Express, the movie In The Heights, and gave some updates on the Drama Book Shop.

Check all the pictures in HQ in our Gallery. 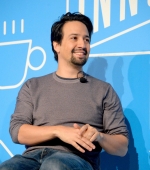 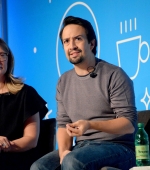 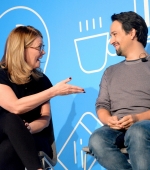 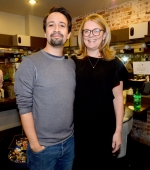 In the video below, Miranda discusses how ‘Hamilton’ has changed his career.

Under the cut, read more reports from the panel.

Fast Company: Along with being the creator of a little show called Hamilton, Lin-Manuel Miranda is also known for his enthusiastic social media presence—including a rapid-fire tweeting style that helped spread the word about his future Broadway megahit back when it was still finding an audience.

Twitter, in other words, is one way to help fuel the biggest thing on Broadway, but at 39, Miranda still thinks small in a lot of ways, particularly when it comes to which businesses he supports and where he puts his money. He famously still lives in the same upper Manhattan neighborhood where he grew up, and his first musical, In the Heights, espouses the virtues of local communities and the stories people tell within them.

“I’m the old guy in the bodega who is still talking about boxers,” Miranda told a crowd at the Fast Company Innovation Festival in New York today. “I’m an aggressively small-business person.”

So when one small business he has a personal connection to recently found itself on the brink of oblivion, Miranda did what any civic-minded Broadway sensation would do: He bought it. That business is the Drama Book Shop, a century-old bookstore in midtown Manhattan that for decades doubled as a de facto incubator for playwrights, actors, and anyone else looking to break into New York City’s theatrical community.

It was in the bookstore’s basement theater where Miranda first met Thomas Kail, the stage director who would become his main collaborator on In the Heights and Hamilton. “He had the audacity to go to their basement, paint it black, and say, ‘We’re a black-box theater,” Miranda says of Kail.

“It was really kind of extraordinary,” Miranda recalled. “The people who needed to show up for it did.” He said the shop will reopen in March, at a new location to be announced soon.

Then he added, with a mix of zeal and incredulousness: “We’re opening a bookstore in post-Kindle, post-Amazon America!”

Miranda told the story on a panel with Elizabeth Rutledge, the chief marketing officer of American Express, where the two discussed their partnership on a campaign to promote Small Business Saturday, which is November 30. The theater creator appeared recently in a commercial spot for Amex that features a number of businesses in his neighborhood.

You could make the argument that a physical bookstore is a bad business bet in 2019, but Miranda is convinced there’s an appetite for physical spaces in the digital era, a longing for communities based on physical proximity. And let’s not forget, it was a physical book—Ron Chernow’s biography of Alexander Hamilton—that serendipitously inspired the musical phenomenon that made Miranda a household name.

Of course, being in the brick-and-mortar business doesn’t mean the prolific social media user will be hanging up his smartphone anytime soon, and in fact he was retweeting quotes from today’s panel discussion within minutes after it ended.

“There are these pockets of community, even within the larger dumpster fire that is Twitter,” Miranda said.

The Hollywood Reporter: Lin-Manuel Miranda closed out the fifth annual Fast Company Innovation Festival on Friday, discussing the upcoming film adaption of his musical In the Heights, along with his passion for supporting small businesses — which recently drove him and several friends to purchase New York City’s Drama Book Shop — with American Express’ chief marketing officer, Elizabeth Rutledge.

Miranda created and composed In the Heights, a story about the Hispanic-American neighborhood of Washington Heights in New York City, at age 22. However, he won’t be reprising the role he originated on Broadway in Jon M. Chu’s movie adaptation and will instead appear in a small part and serve as a producer.

“The thing that In the Heights is really about is what happens when the people who make a neighborhood special can’t afford to live there anymore. And when those businesses can’t afford to stay,” Manuel said. “Gentrification is tough to dramatize because it’s many forces at work at once. So we really kind of responded with the complexities that I think it deserves.”

In addition to illustrating the rapidly changing neighborhood, Manuel explained that In the Heights addresses gentrification by showing how certain characters respond to their circumstances.

“There’s one set of characters that sell their business, they move to the Bronx. There’s another set of characters where the father sells his business so his daughter can go farther and finish her education,” he said. “Then the main character, Usnavi, in the final It’s a Wonderful Life minutes, decides to stay.”

Chu’s film adaption will feature actual residents of Washington Heights, where the majority of the movie was shot. According to Miranda, production took over different street corners for a month, telling locals, “Listen, this is going to mess up parking for a few weeks but you’re going to live forever and this neighborhood is going to live forever if we get to make this movie here.”

Shooting the film, Miranda said, “was one of the most gratifying artistic experiences” of his life.

“It took me seven years to write In the Heights. It took me seven years to write Hamilton. But I perform and freestyle twice a week at Freestyle Love Supreme. So I create two, 80-minute shows from scratch every night,” Miranda said. “We basically line up like chefs, we get words from the audience. We have a beatboxer, we have two instrumentalists and then we just make up the show with you.”

Miranda and others, including some of his Hamilton colleagues, have also been scouting locations in Manhattan for the Drama Book Shop. The legendary independent store was facing closure due to rent increases, prompting the group to buy the century-old business.

“It’s about providing a space for community, which I think is really important,” Miranda said, adding that the location will be revealed “soon.”

Fast Company’s pairing of Miranda and Rutledge allowed the two to discuss Miranda’s ongoing partnership with American Express — one that helped him immensely during his efforts to rebuild Puerto Rico after Hurricane Maria’s devastation in 2017.

Most notably, Miranda reprised his lead role in Hamilton in Puerto Rico to raise money for victims of the hurricane.

“The moment that I remember, I got to watch you on stage — you don’t come into the production until about five or 10 minutes I think — and Lin walks on stage, and you can hear a pin drop,” Rutledge described. “And then what happens next, is this five-minute ovation. I still have shivers thinking about that. And I know those ovations happened every night the entire time you were there. I think it’s a testament to the commitment that you have to that community.”

The rest of Miranda’s career, he explained, will be figuring out what to do after Hamilton, “the first line” of his obituary.

“I’m very proud of that to be the first line of my obituary…it forces you to interrogate what you say yes to in a very real way. I don’t have to be doing this. I want to be doing this,” he said. “It’s freeing, actually…all right, that’s handled — legacy handled. What else can I get done with with my time here?”

That’s according to Lin-Manuel Miranda, the Hamilton creator and co-star who wrote his first musical, In the Heights, about a series of struggling small businesses. Miranda, who was speaking alongside American Express CMO Elizabeth Rutledge at the 2019 Fast Company Innovation Festival in New York City on Friday, recently became a small-business owner himself: In January, he and a group of friends bought the Drama Book Shop, a bookstore in Manhattan that had shuttered because of rent hikes.

Miranda acknowledged the struggles most entrepreneurs must face. He plans to reopen the store in March, but is keenly aware of what he’s up against. “We’re opening a bookstore,” he said. “In a post-Kindle America. In 2020. In Manhattan–in Midtown!”

His blueprint for success: Focus on cultivating a loyal customer base–even a small one– by giving them something large corporations don’t provide. In the case of the Drama Book Shop, Miranda said, that probably isn’t the books. “There’s an appetite for this as a center. As a place where people gather,” he noted. “And then on top of that, we’re going to serve coffee–which is the one thing the Drama Book Shop didn’t [previously] do.”

During his remarks, Miranda also drew a parallel between entrepreneurship and the creative process that led to the success of projects like Hamilton. The key to making your ideas work, he said, is to find powerful collaborators. “The biggest head start I had in this industry was meeting [Hamilton and In the Heights director] Tommy Kail at 22, instead of meeting Tommy Kail at 30,” Miranda said. “He was someone who said to me, ‘Let’s just meet every Friday and bring in what you can. Write something for us to talk about on Friday.'”

He added, “Having that person outside of your own brain to hold you accountable is what kept us working on Heights. It was that creation of community.”

Feature: Lin-Manuel Miranda on The Atlantic on What Art Can Do